Air compressor "jump" failure, analyze the reasons and how to deal with it! The so-called air compressor tripping usually refers to the compressor outage caused by the overload of the compressor and the disconnection of the protector.
Usually, except for the ''tripping'' fault caused by the external power supply, which is not the cause of the air compressor itself and does not need to be dealt with, the ''tripping'' fault caused by the tripping of other overload protectors must be treated with care, and the consequences of forced operation may cause the unit to be scrapped.
There are various reasons for the flight jump, the most common one being the high temperature ''jump flight'', especially in Malaysia, where the temperature is relatively high. To deal with high-temperature tripping, it must start with reducing the operating temperature of the unit.

The ''exclusion method'' can be adopted to rule out the causes of the failure one by one. 2. The resistance of the machine head is too large


If the resistance of the machine head is too large, the starting current of the compressor will be too large, that is, the compressor is overloaded, causing the air switch to trip.
Three main situations lead to increased nose resistance:
(1) The viscosity of lubricating oil is high. The temperature in the southern region varies greatly with the seasons, and the ambient temperature in summer can reach as high as about 40 ℃ Many users use 380V motors, which are started by the star-delta conversion step-down starting method. In the early stage, it runs in star mode, and after 2~3s of a startup, it changes to delta mode. If the star-delta transfer switch fails, normal star-delta conversion cannot be performed, the star-shaped current is many times higher than the delta operating current, and the protector delay time expires, which will naturally cause the compressor to trip. In addition, due to vibration and other reasons during the use of the air switch, the set start-up time is shortened, which may also lead to ''jumping'' at the moment of start-up.
The most direct and effective way to judge whether it is an electrical fault or a mechanical fault is to separate the motor from the head, that is, to remove the coupling or belt connected to the head. Manually crank the compressor unit and motor separately to rule out mechanical problems.
If it is caused by the mechanical reasons of the compressor head and the motor, the motor can run normally when the load is thrown off and the motor can run normally; otherwise, it is a problem with the electrical part.
But please note that some of the faults are caused by the motor itself. It feels normal when the motor is manually turned, and the motor behaves normally when it is started with no load. Once the load is loaded, the problem of overload ''jumping'' occurs. This problem is generally the motor bearing. Or caused by the misalignment of the connection between the motor and the compressor host.
In the actual production operation, there is another reason for the tripping, although it is relatively rare, it also exists. Electronic control system faults, such as false alarms of temperature probes, ultra-high temperature trips, and alarms caused by faulty actions of temperature relays and circuit breakers in high-temperature environments. 4. Failure of the unloading valve 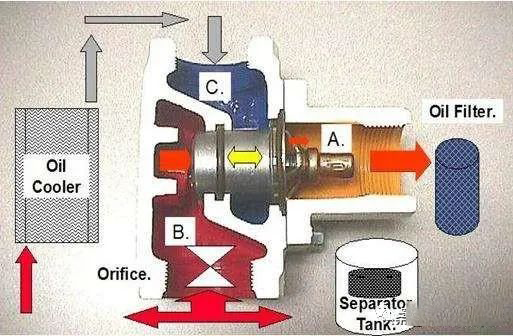 6. High-temperature trip due to lubricating oil


Lubricating cooling oil failed. The lubricating oil of the air compressor not only lubricates the moving parts, such as the rotor and the vane that rotate at high speed. Moreover, a large amount of heat energy is generated during the cooling and compression process, such as friction heat generated by the relatively high-speed motion of the friction pair and heat energy generated when the air is compressed.
The air to be compressed contains a large amount of dust, water, and corrosive hydrogen fluoride and sulfur dioxide gas, which has a great impact on the lubricating oil and makes the lubricating oil ineffective. After the lubricating oil fails, the oil film is not formed on the relative motion pair, the heat generated by the relative motion friction increases, and the cooling effect decreases, which makes the temperature rise of the air compressor too high during operation.
In addition, the characteristics of high temperature ''jumping'' caused by faults in air coolers, water coolers, and three filters are more obvious, so I won't repeat them.
In short, there are many reasons for compressor tripping, and there are many reasons for it. Only when we have a more comprehensive understanding of the operating principle of the compressor and the function of its components, can we prevent the tripping failure of the compressor before it happens.